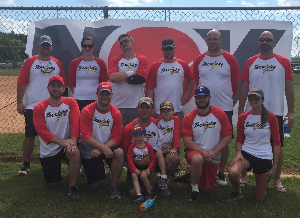 Welcome, and thank you for taking your time to learn more about Team Luke and the Derricks & Diamonds Softball Tournament.

Team Luke is excited to be participating in the 2016 Derricks & Diamonds Softball Tournament. This team was formed in honor of one of our team member’s six year old son named Luke, who was diagnosed with Acute Lymphoblastic Leukemia in March of 2013. Luke is a huge baseball fan and was signed up to play tee-ball in early 2013. However, due to his diagnosis, he wasn’t able to make a practice or game that year. Luke, through Texas Children’s Hospital, underwent extensive testing, numerous blood transfusions and harsh chemotherapy treatments for almost three years. Today, in 2016, Luke is finally finished with treatment and is doing great! And in March of 2016, made his first tee-ball practice!! Celebrate with us and join Team Luke’s efforts to raise awareness about childhood cancers as well as funds for research and the treatment of children like Luke.

Derricks & Diamonds is a charity softball tournament benefiting Texas Children's Hospital Charity Care Program, Cancer Center and the Snowdrop Foundation. Organized by National Oilwell Varco and Schlumberger, the tournament is a result of the companies teaming up in an effort to unite the Oil and Gas Industry around an event focused on fighting pediatric cancer.

We appreciate you joining with us in the fight against childhood cancer.